Animating Scapa 100: a playful take on the German Fleet scuttling

Back in January the Collections Development Team were pondering the age of some of the long -lived molluscs in Scapa  Flow and how  some of the specimens in the museum, such as the Fan Mussel donated in the middle of the 20thC, might even have “witnessed” the scuttling of the fleet in 1919.

Inspired by this Robert Rendall illustration I joked it might be fun to do a stop-motion film of the scuttling from the “shell’s eye view”.

Fast forward to the annual Stromness Shopping Week in July and our 'Animating Scapa 100’ workshops were in full swing.  BAFTA nominated film maker Lizzy Hobbs flitted around the Marjorie Corrigal room at Stromness Library giving help and guidance to the workshop participants, all completely absorbed in their work.  Each person was working at an iPad set up on a tripod, recording 12 frame-per-second stop motion animation.

The participants ranged from age 6 to over 60.  Multiple generations of several families worked together to make fun and sometimes surreal sequences of animation. They chose their own part of the story to animate.  Each of the four days focused on a different element of the scuttling events.

Monday was a chance to animate Scapa Flow’s natural world and imagine life from the perspective of the animals and plants on the seabed. Tuesday focused on life aboard ship – inspired heavily by the writings of German Torpedo Boat Captain Friedrich Ruge. In his book 'Scapa Flow 1919’, Ruge recounts the entertaining ways the German sailors occupied their time.  Wednesday was about witnessing the scuttling – including the perspectives of the Flying Kestrel school children.  Thursday centred on the salvage operations.

We were lucky to partner with Mark Jenkins from West Side Cinema who was done a lot of previous work with animator Lizzy Hobbs.  Lizzy was delighted to be back in Orkney.  Her enthusiasm and energy was infectious.  She quickly engaged everyone who came in through the door and provided short activities for children, suitable for folk just dropping in, as well as coaching the people who returned for day-after-day of animation.

For me the best thing was seeing how absorbed people became in their work.  One of the Dads of two of the kids who came said he was ‘just there to watch’, but within minutes he was sitting down scribbling with a sharpie and animating a fantastic sequence of cockroach racing, which was a pastime the German sailors developed to combat boredom.  One of the ladies who came had ended up having to extend her Orkney holiday due to unexpected illness, but said that the workshops had helped her recuperate.  She said that she was only planning to come the first day and ended up coming three days in a row.  That was really lovely to hear”

The resulting 40 films will be edited together and set to a sound-track by Mark Jenkins and will be screened twice during the Scapa 100 Conference in October.  For more information on the conference click on the link : www.scapa100conference.com

The film will truly be a collaborative effort by locals, visitors, people of all ages, and of course the wonderful Lizzy Hobbs, who we learned so much from.

Stromness Museum and West Side Cinema would like to thank funders:

Many thanks to Orkney Library and Archive for the use of archive images. 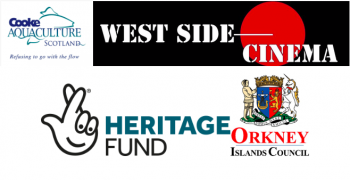