Stromness Museum has a number of internationally significant archaeological artefacts. They include important Neolithic and Bronze Age items from sites throughout Orkney, including Skara Brae.

Some of the Museum’s earliest archaeological acquisitions were obtained through excavations by the Society’s office-bearers, usually under the direction of Rev. Dr. Charles Clouston, the Society’s first President. In 1838, he excavated a series of Bronze Age barrows at Upper Lyking in Sandwick, and recorded the discovery of cremated human bone, a small circular copper ornament and a boar’s tusk. One of the burial urns, including some of its fill of cremated bone, is currently displayed in the upper gallery, but the location of the copper artefact and tusk is no longer known.

For most of the 19th century, however, the Museum was generally more focussed on collecting Natural History than Archaeology. This changed in the 1930s, when the opening of the museum extension coincided with a veritable Golden Age of archaeology in Orkney, inspired in no small part by V. Gordon Childe’s famous excavations at Skara Brae. Nearly 700 hundred objects from Skara Brae were donated by Henry W. Scarth, with Walter G. Grant donating further material from the Neolithic site. Amongst this material is a paint pot, containing ochre, a large number of bone and ivory beads and pins, and the unique carved whalebone figurine known as the Skara Brae Buddo.

As part of a collaborative collecting policy operating across Orkney’s museums, archaeological material is no longer actively collected by Stromness Museum, with new archaeological acquisitions into Orkney going instead to The Orkney Museum in Kirkwall.

Large stone ring. From a grave in Stenness, Orkney, 1924. 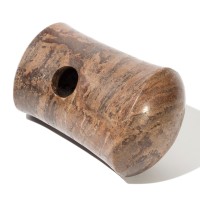 Bone pin, carved with a representation of a human face. 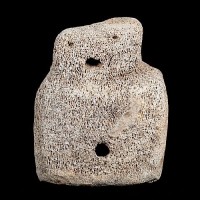 The Skara Brae Buddo is in elite company. Dating to circa 2,900 – 2,400 BC, it is just one of a handful of known figurines from the whole of the British Neolithic.