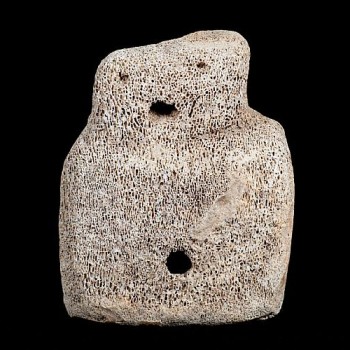 The Skara Brae Buddo is in elite company. Dating to circa 2,900 – 2,400 BC, it is just one of a handful of known figurines from the whole of the British Neolithic. It is exceptionally rare to find representations of humans from this time.

It was originally discovered at Skara Brae by William G. Watt in the 1850s or early 1860s. It was found in a stone bed compartment in House 3, which had already been largely lost to the sea then but was completely washed away in the 1920s. It was illustrated by the antiquarian George Petrie in the 1860s, but until recently it was thought that this drawing was all that survived. Many of the artefacts from the early investigations at Skara Brae moved to the National Museum in Edinburgh, and whilst some eventually came back to Orkney, the whereabouts of some them became lost to time – including, it was thought, the figurine. Amazingly, it was rediscovered in April 2016 by Dr David Clarke, who was undertaking research in the museum. It had lain hidden in a box of artefacts in Stromness Museum’s archaeological stores that were donated in the 1930s without information on their provenance.

The figurine got its name when it was rediscovered. Buddo is an Orcadian word which is a term of endearment and isn’t gender-specific. It’s an appropriate name, as although many prehistoric figurines are thought to be female, there is nothing to suggest Buddo’s gender. Petrie described the Buddo as having been cut as if for an idol or “Fetish” but it may just have easily been a child’s toy. A handful of Neolithic wooden ‘dolls’ have been found in waterlogged deposits in England, suggesting that other figurines may once existed in organic materials but have simply not survived. What do you think?