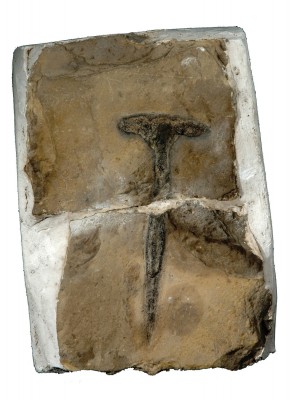 It is named after one of the museum’s earliest supporters, the geologist, stonemason, poet and journalist Hugh Miller, who found it on the west shore of Stromness. A star exhibit within our Natural History collection, this flat, heavily armoured placoderm fossil, was found within the Old Red Sandstone sediments of the Sandwick Fish Bed. In the Devonian period, the area now known as Orkney was occupied by a deep freshwater lake now known as Lake Orcadie. This sat within an equatorial and mid-continental desert and its waters abounded with animal and plant life. Fossils of many of these became sandwiched in the sediments of the lake, laid down over millions of years to become the sandstone bedrock of the islands today.

Many of the fish species living in Lake Orcadie and its rivers have played a crucial role in the evolution of fish, and the emergence of the first vertebrate life on land, making Orkney’s fossils internationally significant.

In the 19th century, many pioneering geologists were attracted to studying Orkney’s fish fossils, including Hugh Miller. In 1846 he visited the islands and went fossil-hunting along the west shore just outside Stromness. It was there that he found this fossil, which he described as ‘in all probability the oldest vertebrate remains yet discovered in Orkney’. Miller’s discovery led him to write 'Footprints of the Creator, Or, the Asterolepis of Stromness', a masterpiece of popular science. Hugh Miller was an honorary member of the Orkney Natural History Society.